By DancingAstronaut.com on March 15, 2019 in General, jai wolf, mom+pop, Music, release, Single, the cure to loneliness, This song reminds me of you 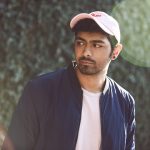 Winter seems to be on its way out. The coals of fireplaces have cooled, windows have opened, the wind is now welcomed. In tune with this feeling, Jai Wolf‘s latest track, “This Song Reminds Me Of You,” has been released.

“This Song Reminds Me Of You” features synths that traverse smoothly over any landscape, over every horizon. A chorus of hums and vibrato of guitar create a feeling of absolute possibility.

“I started this song at an airport at 5 a.m.,” the producer said in a press release. “I was about to head out on a bus tour and felt really excited, so I wanted the song to capture that exact feeling.”

The result is an upbeat fluid and sweet sounding track that evokes inspiration to explore. The track is the fourth release from Jai Wolf’s upcoming and debut studio album, The Cure To Loneliness, set to release April 5 on Mom + Pop Music.