By DancingAstronaut.com on March 13, 2019 in body talk, Dancing On My Own, General, Hang With Me, honey, Madison Square Garden, Music, News, robyn, subway 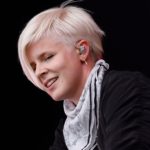 The burst of public energy came shortly after Robyn’s Honey tour stop in NYC, with Twitter catching some special moments of concert-goers bouncing to “Dancing On My Own” and “Hang With Me” on the A train platform at 34th Street stop. These two hits off the Swedish pop star’s 2010 Body Talk album gave late-night commuters a glimpse of collaborative cheer that occasionally materializes in the metropolis’ murky subterranean holdings.

Robyn’s Honey tour celebrates her eighth studio album, released last year, and her first since Body Talk in 2010. She wraps up the North American portion of her tour on March 14 in Toronto before heading off to conquer the European leg.

#Robyn Afterparty at the E train station after the @robynkonichiwa show at MSG pic.twitter.com/qBCSrPuT9N