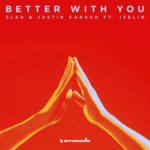 Those who have watched Justin Caruso‘s ascension into ubiquitous popularity, thanks to his catchy crossover releases and stellar remixes, know that 3LAU took the producer under his wing years ago before Caruso had made his lasting mark. Their friendship has remained steady, and the artists have now come together with a melodic new release, “Better With You.”

The track combines the best elements of both producers’ styles, elevated by Iselin‘s flowing vocals and the infectious electronic backdrop, which synthesizes a bouncy progression, luring the listener in note by note.

3LAU spoke on the collaboration in an official release, saying, “Justin Caruso and I met years ago, and when we sat down to write ‘Better With You’ together, we wanted to capture the essence of dance music culture with the song.”

Dance music is all about sharing experiences with the people you love, the same way DJs all support each other’s music, and best friends get to escape frustrations of daily life at live shows. We really hope you like this one, and shout out to Iselin who wrote an incredibly beautiful vocal.”

Listeners may recognize the Norwegian singer Iselin, from her syrupy vocals on Alan Walker‘s “Faded.” Both Caruso and 3LAU have been keeping busy with new music releases, and “Better With You” is a strong start for the pair moving forward into 2019. The track is out now on Armada, which marks 3LAU’s return to a major label after years of releasing via his own label, Blume.

These Are the Must-See Movies and TV Shows Premiering in March
The Rise And Fall Of The Frag Dolls, A Group That Blazed Trails For Women In Gaming