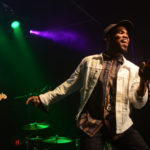 Seasoned crooner Anderson .Paak just doesn’t seem to ever run out of steam. Mere months after dropping his highly acclaimed LP, Oxnard, in November 2018, .Paak is back, and eyeing his next album release. The followup to Oxnard bears the name Ventura, and as in the case of Oxnard, Ventura too accredits Dr. Dre as the project’s executive producer. Slated to arrive on April 12, Ventura is the fourth and final installment in .Paak’s narrative series of albums.

“Growing up in Oxnard gave me the grit and the church to find this voice of mine. One town over, I went further and found my depth,” .Paak said in a release. “The duality of each place inspired me greatly and from that I made two albums at the exact same time, but held one back because that would have been too many songs to perform live for you all! I like ending things on an even number, so welcome to Ventura.”

Post-Ventura release, .Paak will embark on a 21-date tour in support of the album. Thundercat will assist at each stop on the tour, while Earl Sweatshirt, Noname, Mac DeMarco, and Jesse Reyez will appear as openers on select dates. The tour, entitled “Anderson .Paak’s Best Teef in the Game Tour,” will take the artist through a myriad of major U.S. cities, spanning New York, Toronto, Chicago, and more. Tickets to the tour will go on sale on March 8. Each ticket purchase comes with either a CD or digital edition of Ventura.