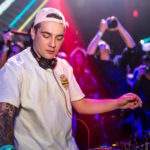 Getter is becoming an expert at keeping fans on their toes. Whether he is quitting electronic music or just renouncing dubstep, the artist has switched creative directions plenty of times and thus proven he is far more than a one trick pony when it comes to manufacturing screeching synths and heavy drops.

Getter released full length album Visceral in 2018 after opening up about his desire to produce more than just the hard-hitting electronic music that catapulted him into stardom. The album spanned a bevy of genres, and the LP ultimately enjoyed widespread positive acclaim. At the time, some fans of his earlier, heavier handed sound expressed displeasure when the “Big Mouth” producer stepped away from his championed genre entirely, so now Getter is back and he’s giving the people what they want on his latest, “Ham Sandwich.” Well, sort of.

“getter is soft now”
me: pic.twitter.com/Yzhwse8v1I

“Ham Sandwich” combines wobbly, wonky synth layers with a steady drum beat for a syrupy, downtempo drip that has all the makings of a menacing bass cut, but rather opts for a more laid back disposition that relies heavily on the experimental trap sound Getter fans know and love.