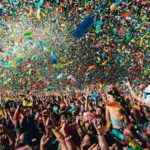 Star-studded collaborations rule this week’s NMF. Ekali and 1788-L have joined forces to craft a formidable, bass-heavy collaboration, “R U I N,” and Gareth Emery and Ashley Wallbridge continue their powerful slew of releases together with “Lionheart.” Netsky taps Lil Wayne and Bazzi for “I Don’t Even Know You Anymore,” and Zedd and Katy Perry deliver their radio-friendly “365.” Feed Me returns for the second Friday in a row with “Sleepless,” and Kygo releases his first single of the year with “Think About You.” GRiZ and Matisyahu take a stand on gun violence in “A New Day,” and Madeaux brings a sultry, dark atmosphere with “ADDICTED2.” Andrew Bayer delivers an “In My Next Life” mix of 2018’s “In My Last Life” on Anjunabeats. Goshfather puts his own disco-infused twist on Madonna‘s “Like a Prayer” in his new remix, and Liquid Stranger teams up with CloZee for the eerie “Ceremony.” Kill Paris debuted his new album for Valentine’s Day, touting collaborations with the likes of Fatherdude, Big Gigantic, and more, and Armin Van Buuren tugs at listeners’ heartstrings via “Lonely For You” with Bonnie McKee.