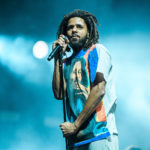 J. Cole has released his first track of 2019. In typical Cole fashion, fans were bombarded with the announcement of “MIDDLE CHILD” with a seemingly out of nowhere clearing of his Instagram feed, replaced with posts promoting his new song. Produced by T-Minus, the track follows the release of the North Carolina rapper’s highly anticipated album K.O.D. in 2018.

“MIDDLE CHILD” addresses common themes that have arisen throughout J. Cole’s career, including his quitting the rap game (which, through this single’s exercise it becomes clear he’s not quite ready to stop rapping just yet). Cole also explores impressively beautiful metaphors—a trait that has become integral in his brand—this time, comparing his own rap career to being an awkward middle child between two generations of rhymers. The new track is Cole’s first solo single since 2013. While it’s unclear if “MIDDLE CHILD” is a signal for more music down the line from the famously platinum-with-no-features rapper, if this was in fact the first single from a larger project, this would be the beginning of J. Cole’s first traditional album roll out since Born Sinner.