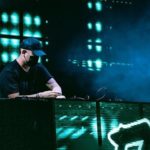 LICK may not be a household name yet, but that’s likely all about to start changing. The emerging Phoenix-native producer is the newest recruit to be called up to the Alt:Vision ranks, joining the likes of Wolfgang Gartner, Autograf, Drezo, k?d, and Dancing Astronaut‘s Breakout Artist of 2018, Medasin, among others. To celebrate his freshly-inked deal, LICK took on Gartner and Skrillex‘s unforgettable “Devil’s Den,” for a brand new remix that introduces the up-and-coming producer in bold fashion.

The original track, found on Skrillex’s Grammy Award-winning Bangarang EP which just celebrated its seventh anniversary, has maintained a constant spot within Skrillex’s sets over the years. Now, with LICK’s rendition, the track has received a modern day mid-tempo revamp that’s equally suited for heavy live play, perfectly toeing the line between fresh and nostalgic.

LICK is primed for a breakout campaign this year with a Deadbeats-signed EP already slated for early 2019, as well as major festival bookings including Electric Forest later this year. Making a splash at the onset of 2019 with an aced “Devil’s Den” remix, expect LICK to stay on your radar all year long.