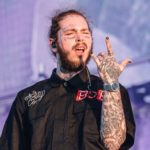 Post Malone is back with a new hip-hop heater before the year’s end, as promised. The “Sunflower” collaborator announced that he would drop a song “before the year ends” on December 13, and now makes good on his claim with his final offering of 2018, “Wow.” The mellifluous single taps into the Post Malone technique that has long ensnared listeners: smoothly delivered verses, half-rapped half-sung, that float with finesse above the track’s catchy background beat.

Malone’s latest is a chilled out joint that bumps with tempered but perceptible energy. “Wow” arrives with an animated music video that featured a cartoon Post Malone, complete with face tattoos, and in the spirit of the holiday season, a Santa hat. The Christmas-themed video offers a festive visual for the single, which comes not out of Santa’s workshop, but Malone’s wheelhouse.

Song before the year ends m/