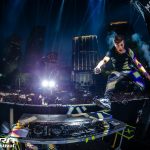 If 2018 has proven anything, it’s that Martin Garrix cannot be stopped. The producer has continued his stream of chart topping crossover releases — he put out a 5-track club ready progressive EP, and he teamed up with unexpected subway singer Mike Yung for a gospel-inspired “Dreamer,” proving that the young beatmaker isn’t letting celebrity get in the way of creativity, in terms of breaking the EDM mold.

While Garrix himself has seen considerable success in 2018, his label STMPD RCRDS has gone from just finding its footing to a blooming powerhouse of a label in just a little more than a year. After hosting stages at Tomorrowland, Balaton Sound, and having a label night during Amsterdam Dance Event, in 2019 STMPD RCRDS will be hosting a stage at Ultra Music Festival for the first time. The STMPD RCRDS Stage will feature label frequenters Matisse & Sadko, TV Noise, Lost Frequencies, Junior Sanchez, Brooks, and of course, Garrix himself. Hosting a stage at Ultra will continue to build on the label’s continued success, and this showcases that STMPD is a force to be reckoned with after hosting a stage at one of the most prestigious festivals in the world.

Martin Garrix put up a year for the books in 2018, and with a full stage secured at Ultra next year, it looks like he’ll be continuing his hot streak into 2019.