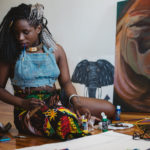 Teamarr is taking fake dudes to task with an infectious new single, “One Job.” The single is the first sip of the LA based artist’s upcoming full length project, Tea Turns to Wine. Crowd pleasing snaps and claps drive the beat over a jazzy bass line, providing the perfect platform for the singer to call some clowns out. Her voice bends and jumps with equal parts coolness and edge, her delivery smooth enough to require rewinds on the lyrics’ unapologetically raw takedowns.

The track arrives alongside an ultra-creative Tyren Red-directed lyric video, with Teamarr starring as a barbie doll version of herself in a twisted doll-house drama. Although the song holds up fiercely as a feminine vengeance anthem, the singer’s writing was rooted in deeper ground, as she explains:

“There’s an element of female empowerment to my music, and “One Job” kick starts everything. When I was writing it, my friend was going through some mental domestic abuse with her man at the time. He was so trash. I transferred that energy. At the same time, my one job is to prove myself as a songwriter and a singer, which I did here.”