By DancingAstronaut.com on August 9, 2018 in Eprom, Flying Lotus, General, Music, Rezz, Slumberjack, what so not, Zeke Beats 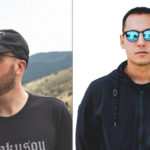 Quite some time has passed since the reign of “Humanoid 1.0,” and while it’s still a fan-favorite track, 2.0 has been on the horizon. For the better half of a year, the upcoming collaboration has earned spots in a myriad of live sets across the bass world, leaving fans eagerly awaiting its release when its identity became more clear. Well the wait is almost over, as turntable expert ZEKE BEATS and west-coast superstar Eprom have decided that it’s time for 2.0’s official launch on Friday, August 10.

To build additional hype, the producers have curated an ORBIT playlist that is nothing short of bass heaven. This 34-piece collection is the perfect soundtrack for anyone in need of some heavy beats, containing heaters from REZZ, SLUMBERJACK, Flying Lotus, and more. There’s also some discography from the gents themselves, including ZEKE BEATS’ remix for What So Not on “Beautiful,” and Eprom’s original track “Pineapple.”

Try not to get too crazy to the chaos that is this ORBIT, and pre-order “Humanoid 2.0” here. ZEKE BEATS will head to Morflo Music Festival August 24 and Eprom makes his Tampa debut at The RITZ Ybor right after release day on August 10.