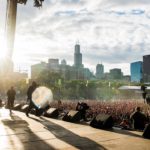 Lollapalooza is this weekend in Chicago, and Dancing Astronaut is hosting a live stream of the music festival.

With headliners such as The Weeknd, Bruno Mars, Jack White, Arctic Monkeys, and Travis Scott, the festival’s 27th year in existence should be one for the ages. After changing to a four-day event in 2016, Lollapalooza is easily one of the top-attended music festivals in the United States.

Below are 12 of the most anticipated Lollapalooza performances from an electronic music perspective.

“Space mom” is a must-see for any festival. She’s performing Thursday at 7:15 p.m. CDT, and her new album, Certain Kind Of Magic, comes out Friday on mau5trap. REZZ was just featured on the cover of DJ Mag‘s August issue.

After killer sets at Red Rocks and Panorama, ODESZA looks to bring their massive live-electronic show with their big synths, drum line, and stellar light show. The duo is the headliner of EDM at Lollapalooza, and there are rumors of a potential Foreign Family festival in 2019.

After beating cancer, the British dubstep pioneer is back in action. He dropped his Has Made Five More Songs EP, this year, and the flag-bearer of contemporary dubstep knows how to throw down, recently coming off supporting Zeds Dead in London. Dubstep whomps at 6 p.m. CDT Friday? Yes, please.

The 16-year-old from California had her debut EP, Don’t Smile at Me, rank on Billboard‘s top 200 list. The distraught yet swagged-out teen recently had a tarantula emerge from her mouth for the new single, you should see me in a crown. Imagine what the eclectic and eccentric young trendsetter will bring to the stage.

The budding actor, director, and TV writer is also one of the most ...