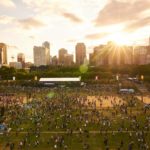 The most happening musical celebration in Chicago, Lollapalooza, has announced that this year, those not attending the festival will have four different live channels for all things Lolla at their disposal, thanks to Red Bull TV.

While three of the channels will be reporter-led coverage, the fourth, through the Red Bull Music Youtube page, will offer live streams of the festival sets via virtual reality. The new streaming installment, compliments of C3 Presents, Live Nation, and Google‘s own AR/VR team will “virtually transport fans from anywhere, in real time to the front row at Lollapalooza.”

Coverage is set to begin on the Grant Park festival grounds the day of commencement, Thursday, Aug. 2, at 6 p.m. CST and roll on throughout the weekend until the fest’s conclusion Sunday. The four-day affair boasts an eclectic-as-ever lineup this year, headlined by categorical virtuosos like Jack White, Arctic Monkeys, Bruno Mars, Travis Scott, and The Weeknd, who will all be included in the live streams. The live broadcast will also include sets from top-tier electronic acts like Tycho, Rusko, ODESZA, Illenium, REZZ, and much more.

Streaming will be available here.