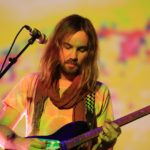 Apple Music/Beats1 host Matt Wilkinson had the chance to sit down with Tame Impala mastermind Kevin Parker in a recent interview. Chatting about recent collaborations, live performances, and the band’s upcoming album, Wilkinson dives in to give us a picture of the frontman’s post-Currents life.

Parker talks about the possibility of new music from Tame Impala. Without giving too much away, the Australian artist notes that he would be “very disappointed” if there was not a new Tame Impala album out by this time next year. While the details remain hazy, and the direction that the band will take its music unknown, recent collaborations with ZHU, Miguel, and Mark Ronson may suggest a continuation of the accessible yet psychedelic dance-pop sound explored on Currents.

While Kevin Parker’s part-introvert, part-socialite personality allows him to lock himself away in an oceanside cabin to complete a project, it also means he can be a fervent collaborator. He spent time in the studio with SZA recently, and while rumors swirl about a full length project from the pair, he notes that he “can’t really do anything more than hope” that the music will come out, though he suggests that at least one track, titled “Back Together,” would be the most likely to emerge. Parker also speaks on some brief studio time with Travis Scott, though no concrete material seemed to surface from that session. On the other side of the spectrum, the frontman said he would be happy to collaborate with the Arctic Monkey‘s frontman Alex Turner, a pairing that would surely set the indie world on fire. While we haven’t received any new music from Tame Impala today, Kevin Parker’s busy schedule and vast reach in the world of music should have fans of the band looking forward to the next few months.