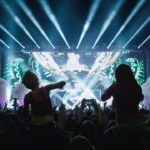 The most important day of every week: New Music Friday. As each week brings a succession of new music from some of electronic music’s biggest artists, here’s a selection of tracks that shouldn’t be missed.

Brothers by blood and collaborators by choice, DubVision has concocted a new, transcendently vocalized progressive house anthem, “Steal The Moon,” with lyrics and piano chords as ambitious as its title.

Far from his first run with Anjunabeats, Audien has made an auspicious return to the label with “Higher,” twinkling, atmospheric, and emblematically Anjuna, with vocal accents from Cecilia Gault.

Future house furnishings compliments of Mesto‘s “Give Me Love.”

One of the freshest and most vivacious new faces to make his way on the house spectrum, FISHER, has graced Catch & Release with “Losing It,” pitched-down, nefariously fun, and imperatively danceable.

Mothica has once again lent her sensuous and full-bodied musings to insectile counterpart Icarus Moth, for “Don’t,” perpetuating an already longstanding musical partnership.

The now-one-man show of Flosstradamus has proven he has no intentions of ...