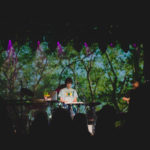 After the release of his sophomore EP in April 2018, Philadelphia-based producer Instupendo now released an accompanying visual accompaniment. The EP’s four tracks each received their own distinct video, filmed and directed by the group Altabrea, who previously worked with the artist for the video to his single “Homme” and produced visuals for his performance at Brooklyn Steel in support of Rostam.

The visuals match well with Instupendo’s dreamy, mellifluous style, with montages that evoke the optimism and melancholy, the youthful possibilities with the nostalgia that are readily apparent in the EP.

On working with Altabrea again, Instupendo said, “James Ronkko and Alice Agrusa are two of my favorite film-makers. They’re lovely people to work with and I appreciate and trust their aesthetic. I was excited to see how they’d interpret the EP.”

The visual for Faces I Know‘s second track, “Sunny,” is available above, with the entire visuals, hosted by Majestic Casual, available below.