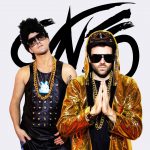 It’s official: the We Are CVNT5 video series has an official air date, with a new trailer previewing the series detailing what it’s like to be the most famous DJs in the world.

In 2016, Gareth Emery teamed up with Ashley Wallbridge on a track “CVNT5” on Emery’s album 100 Reasons To Live that was released that year. The track quickly evolved into a parody, as the two producers linked up under the new moniker, assuming paradoxical versions of themselves in the new duo that represented every extreme EDM stereotype to date. And it worked, with the ensuing music video and further skits drawing laughs and attention from fans. In 2017, the guys filmed a series backed by $2 million budget to air at a future date, one that is now finally coming to fruition.

Eight episodes of We Are CVNT5 will debut on June 28 via Verizon Go90.