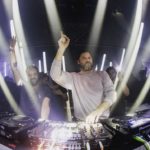 Rockstar Games added nightclubs in the Los Angeles-inspired Los Santos on its award winning video game, Grand Theft Auto V. They’ve also announce residencies in the virtual world from some of the biggest underground house and techno stars: Solomun, Dixon, Black Madonna, and Tale of Us. Earlier, we were teased about their potential cameo appearances in GTA when mysterious promo began popping up on each act’s respective social media channels.

In July, gamers will have the opportunity to hear new, exclusive sets from the resident DJs. Nightclubs are perfect covers for certain operations one might conduct in the vice-ridden video game. Learning how to run a nightclub with some of the best DJ sets in the industry sounds like a house head/gamer’s dream.

The video below is the teaser video showing the DJs likenesses in the game, including those signature Solomun dance hands. With the direction of technology in the world today, virtual DJs will be more than just the mixing software.