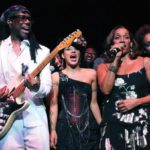 Disco funk legend Nile Rodgers announced mid-June that he and his storied band Chic had a new album on the way, the band’s first effort in 26 years. Modern day maestros of the genre — and a few unassuming additions — were enlisted for the making of the record, including Anderson .Paak, Vic Mensa ,Stefflon Don, and Craig David and now, we’re getting a taste of the madness that’ll ensue with the LP’s first single, “Till The World Falls.”

A tantalizing and glitzy new disco track with a Vic Mensa verse and Mura Masa guest appearance; “Till the World Falls” is a meeting of glorious past and present funk extravagance. Anderson .Paak, NAO, and anaïs each had a hand in the track’s songwriting.