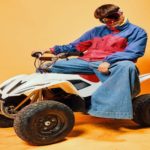 In a day when memes can become rappers — where the Bhad Bhabies and Big Shaqs of the internet are out here scoring major record deals (honorable mention, Mason Ramsey) — somehow living meme incarnate Oliver Tree is actually flipping the already wild idea on its head. Although signed to a major label himself, he’s warping indie-rap into something completely new, and ultra-contemporary, and considering the rhymer’s hilarious aesthetic, it’s ironically working, really well. Putting on his own blend of tenacious electro-punk/hip-hop, his latest,”Movement,” falls right in line, with a lo-fi gut-punch anchored around Tree’s fearlessly swaggering versework.

The Whethan-produced track lays down a plucking bass line with the beat building into a thundering glitch-hop backdrop on which the Alien Boy wunderkind delivers his latest bars. Proving to be a formidable pairing with Whethan once again following “Enemy,” Oliver Tree adds another rinse-worthy hybrid cut to his arsenal with “Movement.”