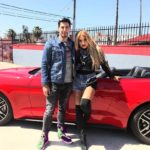 Instagram celebrity and singer Montana Tucker has opened for the likes of Pitbull, Flo Rida, and Lil Wayne, but her next booking takes a different turn as the star of Thomas Gold‘s music video for hit track “Begin Again.” Tucker dances the viewer through the video, first on a neighborhood street, and next in a pink wonderland of a bedroom. She also lip syncs the male vocals, giving the video an interesting twist.

Gold makes a cameo a minute in, handing off car keys to Tucker who dances the video away from there. Gold spoke with DA about “Begin Again,” as well as working with Tucker for the video.

“‘Begin Again’ marks kind of a milestone for me. I went back from the downtempo stuff (like ‘Magic’ and ‘Dreamer’) to a more uptempo vibe, but the production still has a crossover approach. To me, this kind of defines the 2018 summer sound, and I am super excited about the video we did – it features Montana Tucker all throughout, in different scenes and places. I met her when we shot the video, and apart from her super cool acting,  it was a lot of fun to work with her!”

Gold released the track on Armada Music, and it showcases his diverse production abilities as he goes in a different direction with his sound. Gold is kicking off his summer with an Asia tour, and will certainly be dropping the catchy track throughout.

Do LaB and Dirtybird end Dirtybird Campout partnership
PSA: It’s Your Last Day to Join Amazon Prime For $99 Per Year