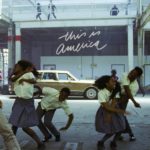 Donald Glover‘s made an impassioned return into the musical sphere, despite an announcement that his forthcoming Childish Gambino LP would be his last.

Citing an eventual departure from music as an important step toward progress, Glover’s latest is a sociopolitical reckoning, and his first new material since 2016’s neo-soul pastiche, Awaken, My Love! On the heels of a widely buzzed Saturday Night Live appearance, in which Glover hosted, performed, and even made a playful jab at Migos with a segment dubbed “Friendos,” Glover’s now shared the new music video for his latest track, “This Is America.”