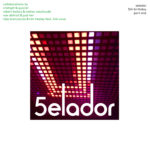 Selador has made it past the milestone half-decade line. The label — founded by progressive stalwarts Dave Seaman and Steve Parry — has become one of the most formidable in its arena, overseeing a consistent slew of caliber releases that have been rinsed far and wide throughout the underground circuit.

To mark the momentous occasion, the label has recruited twelve of its close friends and colleagues to fashion celebratory tracks to be released in a series of three EPs. Eric Prydz protégé Cristoph joins forces with the venerable John Graham (Quivver) to contribute to the first wave of releases, and what they’ve come up with is a forceful number suited for the afterhours which they call, “In Name Only.”

Their styles are both prominent in the finished product. Its chunky, techy base is doused in crisp, synths that slide downward into hints of classic vocals. These elements make for a dramatic, tense breakdown which detonates into a rocking conclusion. Once again, we find ourselves in awe at just how big a role good arrangement and mastering can play in a production.