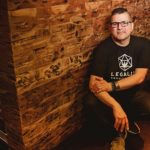 It’s hard to believe that Desert Hearts is already crossing into its fifth birthday. The Southern Californian transformational brand has grown from a humble, grassroots gathering into a veritable institution over its half-decade of existence, and only continues to thrive with its City Hearts offshoots. Now, Mikey, Lee, Marbs, and Pork Chop are celebrating their brainchild’s birthday in the most extravagant of fashions, holding the biggest festival to date and booking an equally immense lineup.

Damian Lazarus will be spinning a stirring four hour set, Doc Martin and Sublevel and SHADED will be bringing their live performances into the fray, and many other talented acts like Kenny Glasgow and Dance Spirit also making an appearance. Dancing Astronaut had the privilege of sitting down with a series of the talent on the bill, and hosting interviews that they conduct between themselves.

One thing Desert Hearts excels at is highlighting immensely talented local acts on its wistful stage. Our next two performers joining together for a joint interview are hidden gems who both call Los Angeles their home.

Heavily active members of the LA party sphere have probably heard of the distinguishable Doc Martin.He’s primarily known for its impeccable deep house curation and the intimate, good-natured vibes he fosters at each gig. He is also one part of Sublevel Live, alongside the vocalist Lilllia. Having been around since the dawn of raving, more or less, Martin knows how to command a crowd at any time of day, and consistently finds himself on the rosters of many transformational festivals.

Lubelski comes from the new generation of talent bursting out of his Southern Californian locale, and has made a name for himself as a part of the extended Desert Hearts family. His upbeat, high-powered party tech sets ensure his crowds are always ...