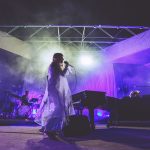 Hundred Waters have shared their first new music since last year’s Communicating LP, which found the band taking a deep dive into the intimate nature of their creation method and the struggle each of their personal connections to one another have endured as the band has evolved over the years. Now, the OWSLA-signed synth-folk trio has dropped off a new single, “Mushroom Cloud,” which was derived from the same studio sessions that led to their most recent album. The ballad is carried by weighty, melancholic piano chords and lead singer Nicole Miglis’ raw, expressive vocalizing, culminating into a cloud of textured white noise — appropriately setting the tone for the accompanying Communicating mini-documentary.

Releasing the new tour documentary between the band’s two Coachella appearances, and just a month ahead of their fifth annual FORM event, Communicating largely explores the six-year relationship between Miglis and her band mate and boyfriend Trayer Tryon. The relationship appears to be deteriorating as the band prepares to embark on a three-month road trip, with Tryon suggesting that Hundred Waters may even dissolve as a result upon their return home. Interestingly, the mini-doc is shot through a keyhole perspective, suggesting there’s more to the story than what meets the eye. And while Miglis, Tryon, and drummer Zach Tetreault have created a catalog of beautifully haunting electro-folk masterworks together at the expense of their now-strained relationships, perhaps Hundred Waters’ incredibly special run may sadly be nearing the end of its course.