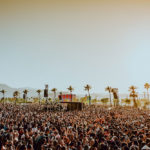 America’s cornerstone music festival is fast approaching its Empire Polo Club descent. As Coachella Music Valley Music & Arts Festival enters its 19th annual celebration, the festival reflects on music’s past, relishes in its present, and amplifies its future. It’s an exuberant apex promising the land of milk and honey for its frenzied fashion frolickers and music aficionados alike.

Those that secured passes this year conquered its fastest selling edition on record despite having endured a price hike. This year sees the Goldenvoice brainchild packing punches and taking names as per usual. Rock ‘n roll’s presence has dwindled, giving rise to rap, pop, and R&B. Beyoncé, The Weeknd, and Eminem are headlining. In the electronica arena, rising acts like Louis the Child, Alan Walker, AC Slater, Petit Biscuit, Whethan, Cash Cash, and San Holo are carrying the torch of a new era of radio-friendly, pop-centric dance music, and Coachella clearly noticing based on their booking choices.

We here at Dancing Astronaut have taken to compile a complete list acts we deem unmissable ahead of the gathering’s first weekend. By now the set times have dropped and there are inevitable conflicts, but these acts are among the most exciting debuts, performances, and compasses for where dance music has been and will shift in the years to come.

If a cosign from Skrillex doesn’t entice you, perhaps it’ll behoove you to know that the OWSLA signee Ekali sold out his Babylon tour through December of last year. Maybe you’d like to know that the trap maven moves through genres with ease, having collaborated already with TroyBoi, Denzel Curry, and KRANE. Last year, he released a huge collaboration with Zhu and dropped a wide range of ...